News TeamOctober 10, 2016
AfricaFeatures + AnalysisNewsTravel Warnings + AlertsWar, Violence + Unrest
Please note – the views in the following feature are those of the author and are not necessarily endorsed by Safe Travels Magazine. Before travel, we recommend that you always do your own research, read travel advisories and buy appropriate travel insurance.

red24 is a risk management company delivering a range of products and services to businesses, organisations and individuals around the world. Part of these services includes a full suite of travel safety and crisis management services.

This week’s analysis originally ran as a security briefing from red24 and is reproduced with their kind permission.

The Democratic Republic of Congo: Violent civil unrest in Kinshasa

Conflicting reports indicate that between 32 and 100 people were killed during violent unrest in the Democratic Republic of Congo (DRC)’s capital, Kinshasa, on 19 and 20 September. What arguably started as standard opposition agitation against President Joseph Kabila shortly degenerated into brutal clashes between protesters and security forces, bringing business and transport operations in the city to a virtual standstill. The volatile situation also occasioned incidents of targeted looting and arson; several party offices across the political divide were set on fire, including those of the ruling Parti du Peuple pour la Reconstruction et la Democratie (PPRD) and opposition Union pour la Democratie et le Progres Social (UDPS). Among the areas worst affected by the unrest were the Lemba and Limete communes in the Mont Amba district, the Ndjili and Masina communes in the Tshangu district, and the Gombe commune in the Lukunga district. The severity of the dissension triggered an almost immediate response from foreign bodies, including utterances of potential sanctions against those deemed to be instigating the violence. While tensions have somewhat eased as of 23 September, the situation remains tense and subject to further deterioration in the coming days. 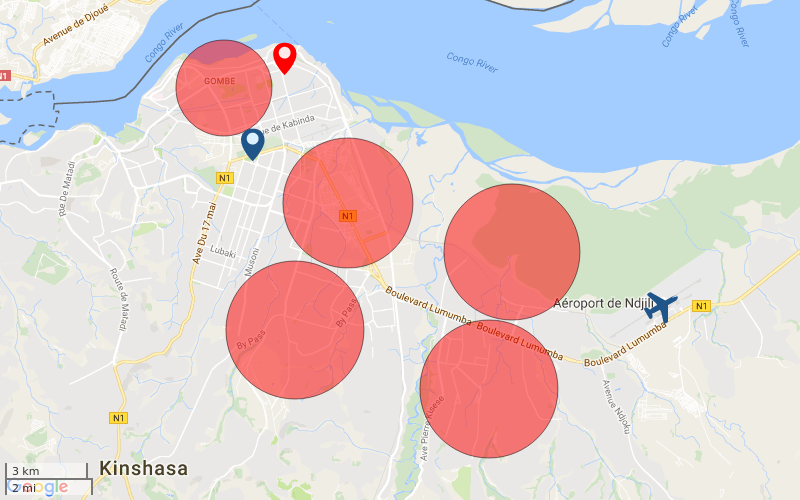 This map shows the communes predominantly affected by unrest on 19 and 20 September, as well as the Palais du Peuple, the Independent National Electoral Commission (CENI) building, and N’Djili International Airport. For an interactive version of the map, please click here.

There has been a significant increase in political tensions and related opposition unrest in the DRC in the past 18 months. The uptick is largely related to the next presidential election, which was initially expected to take place on 27 November, and concerns that Kabila would attempt to remain in office beyond the constitutionally mandated two-term limit by delaying the ballot. Popular opposition figures such as Moise Katumbi (previously a member of the PPRD), Etienne Tshisekedi of the UDPS, and Joseph Olengankoy of the Forces Novatrices pour l’Union et la Solidarite (FONUS), have long accused Kabila of unscrupulous political manoeuvrings to ensure the extension of his rule. Agitations against Kabila’s alleged political schemes have been met by a heavy-handed crackdown by security forces as well as what many assert to be the arbitrary detention of opposition activists. Indeed, Katumbi was infamously sentenced (in absentia) to three years in jail in June for illegally selling a property. The timing of the verdict and associated criminal proceedings were considered politically motivated by Katumbi’s supporters, given that it came shortly after he announced his presidential candidacy, and triggered notable unrest in Lumbumbashi (Haut-Katanga province). Moreover, it was the second time that Katumbi faced criminal allegations in the same year; he had also been indicted on charges relating to the employment of mercenaries in mid-May.

In addition to the apparent harassment and intimidation of rival activists, opposition groups assert that Kabila has also attempted to alter legislation to extend his presidency. While the incumbent’s suggestion of a possible referendum on term limits was rebuffed in 2015, the Constitutional Court ruled in May that he could remain in office beyond his mandate should the country’s elections be delayed, compounding concerns that he would deliberately postpone the forthcoming polls. These concerns were ostensibly validated after the Independent National Electoral Commission (CENI) announced that the elections may well be delayed until at least 2017 due to logistical and budgetary constraints. Additionally, Kabila has stated that the elections could only take place once the voters’ roll has been updated, which the CENI proclaims would take more than a year to complete. Amid these assertions, the CENI has failed to establish an electoral calendar, the absence of which formed the catalyst for the latest spate of unrest in Kinshasa.

While the incidence of opposition-led demonstrations notably increased in the lead up to and following Katumbi’s official announcement of his presidential candidacy, it was Tshisekedi’s highly anticipated return to the DRC in July that signalled a marked increase in the scale of such events. Before his arrival, anti-government protests and associated demonstrations seemingly failed to mobilise more than a few thousand people. Since then, related anti-government protests have been well supported, particularly in Kinshasa. Consequently, when the Rassemblement opposition coalition, led by Tshisekedi, called for countrywide agitations on 19 September, the gatherings were expected to have a significant number of participants.

Given the emotive nature of the intended protests, as well as the anticipated number of demonstrators, the government deployed security personnel to prevent the agitations from taking place. As with most interventions during periods of elevated political tensions, police used excessive force; indignant protesters responded in kind, although some are said to have pre-emptively attacked security personnel. While there has been a notable increase in the intensity and scale of opposition unrest in the DRC, concomitant with growing frustrations with Kabila’s presumed aspirations, the protests on 19 September took place in what could be seen as a ‘perfect storm’. Not only were opposition supporters exacerbated by the ever-apparent realisation that Kabila may remain in office after December, but the demonstrations, which were intended to press the CENI into setting an election date, fell on the day before the constitutional deadline to do so expired. The agitations were therefore seen by many opposition activists as a last-ditch effort to prevent the fruition of Kabila’s political schemes. Although associated demonstrations took place elsewhere in the country, Kinshasa served as the focal point due to its prominence as the capital and the number of party headquarters in the city.

Given newly heightened tensions in the country following the recent violence in Kinshasa, further related protests are possible in the near-term. Moreover, failing the full participation of opposition parties in what is known as the National Dialogue (a political dialogue intended to restart the electoral process), an amelioration of the current political impasse is unlikely. Although the latest demonstrations have centred on Kinshasa, other prominent urban centres, such as Goma (Nord-Kivu province) and Lubumbashi, are expected to serve as parallel focal points for opposition unrest. Precedent suggests that due to the emotive nature of these protests, as well as the propensity of police to respond forcibly to incidents of dissent, there is a credible threat of violence at all forthcoming agitations. Such unrest poses an indiscriminate risk to bystanders and protesters alike, and may result in localised business and travel disruptions in affected areas.

Travellers are therefore advised to avoid all demonstrations and concentrations of security forces as a standard precaution, and accommodate for localised disruptions in the vicinity of any protest action. Persons with business interests in the country should ensure that property is well secured and response measures are regularly reviewed and updated. Crisis management plans, including evacuation plans, should also be regularly reviewed and in-country personnel should be escorted by a trained security driver or close protection officer.

In a shifting and uncertain world, Safe Travels Magazine offers information and advice for people who want to know more before they travel.
Please note: we recommend you ALWAYS check with your nation’s travel advisory before you travel abroad.

Quick Read: 10 Hotel Tips No One Taught You

Travel Advice: FCO warns visitors to Jamaica as states of emergency extended due to shootings