News TeamAugust 18, 2017
AfricaFeatures + AnalysisTerrorism
Please note – the views in the following feature are those of the author and are not necessarily endorsed by Safe Travels Magazine. Before travel, we recommend that you always do your own research, read travel advisories and buy appropriate travel insurance.

red24 is a risk management company delivering a range of products and services to businesses, organisations and individuals around the world. Part of these services includes a full suite of travel safety and crisis management services.

This week’s analysis originally ran as a security briefing from red24 and is reproduced with their kind permission.

The 13/14 August militant siege at the Aziz Istanbul restaurant in Ouagadougou, Burkina Faso, underlines the growing threat posed by Islamist militants across West Africa. The assault replicated a common tactic used by Al-Qaeda-affiliated groups to target foreign nationals at relatively vulnerable bars, restaurants, and similarly soft targets. The Jamaat Nasr al-Islam wa al-Moumin (Group for the Victory of Islam and the Faithful, JNIM) militant alliance probably carried out the attack, and will likely launch similar assaults. JNIM’s formation in March reflects a consolidation of its constituents following attacks and kidnappings targeting foreign nationals in West Africa over the past year and a desire to become the region’s premier militant organisation. If claimed by JNIM, the Aziz Istanbul assault would mark the group’s first international attack. 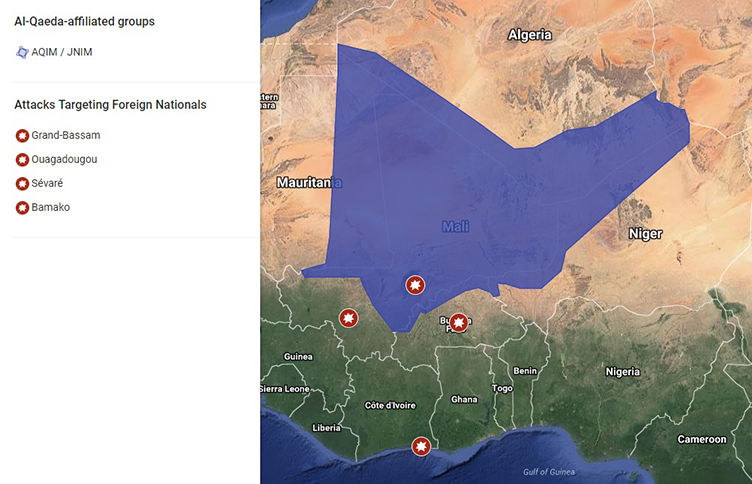 Two gunmen killed 18 people and wounded 22 others when the assailants opened fire on the Aziz Istanbul restaurant in central Ouagadougou around 21:00 on 13 August, and held customers captive overnight. The assailants approached the location on a motorbike at approximately 21:15, with their assault rifles hidden in bags. Security personnel arrived within 15 minutes of the attack’s beginning and engaged in a standoff with the gunmen. Special forces eventually raided the building in the early hours of 14 August, freeing 40 hostages. Militants likely targeted the restaurant because it is frequented by foreign nationals; the victims included Burkinabe, Canadian, French, Kuwaiti, Lebanese, Nigerian, Senegalese, and Turkish nationals. The attack occurred within 200 meters of the Cafe Cappuccino and the Hotel Splendid, which Islamist militants attacked in January 2016.

The assailants’ ability to infiltrate Ouagadougou indicates that Burkinabe intelligence services remain weak following a protracted political transition. A 2014 coup resulted in the dissolution of the country’s best-trained security personnel, who typically focused on suppressing political dissidents. The abilities of these units’ replacements remain unclear, and it is likely that significant institutional memory of intelligence and internal security processes has been lost. Generally, security forces in Burkina Faso are poorly equipped and trained, and have struggled to contain an Islamist insurgency along the border with Mali. However, the rapid response by security forces in Ouagadougou and their liberation of the hostages indicates increased preparedness to respond to militant assaults. Counterterrorism simulations of such attacks conducted by paramilitary units in the Burkinabe capital during March point to a strong prioritisation to address the militant threat more directly.

The government has declared the incident a terrorist attack, but the gunmen’s identities remain unclear. Burkinabe authorities describe the two unidentified killed assailants’ appearance as sub-Saharan African and Arab, and very young. Militants affiliated with JNIM likely perpetrated the attack, following near identical assaults between March 2014 and March 2015 conducted by constituent groups targeting bars, hotels, and restaurants in Bamako, Mali; Ouagadougou, Burkina Faso; and Grand Bassam, Cote d’Ivoire. A failed attempt to attack the EU’s (military) Training Mission at the fortified base at the Azalai Hotel Nord-Sud in Bamako during March 2015 likely reaffirmed a preference for softer targets used by foreign travellers and expatriates. The identity and noms de guerre of the perpetrators identified in these incidents reflected a merger of Al-Qaeda’s transnational targeting proprieties with local recruits better able to infiltrate West African countries below the Sahelian belt. Nonetheless, the protracted delay in claiming responsibility for the attack leaves open the possibility that renegade militants such as those led by Adnan Abu Walid al-Saharaoui may have perpetrated the assault.

Governments in neighbouring countries, including Benin, Cote d’Ivoire, Ghana, Niger, and Togo, are likely to increase security at government facilities, locations frequented by foreign nationals, diplomatic missions, and transportation hubs. Ghanaian and Senegalese officials deployed armed police and military personnel at international border crossings and, respectively, on the streets of Accra and Dakar following similar incidents in Burkina Faso and Cote d’Ivoire during 2016. A similar response to the Aziz Istanbul attack in countries across West Africa is possible; however, the level of increased security is likely to be reflective of the country’s means and resources, and not necessarily the severity or likelihood of further attacks. The US Embassy in Sierra Leone issued an advisory refuting rumours of possible militant attacks after the government positioned security forces outside high-end hotels in Freetown following the January 2016 Ouagadougou attack. The incident will also prompt national leaders to call for a faster deployment of the planned Group of Five Sahelian Countries Task Force (TF-G5), but these sentiments are highly unlikely to have an operational impact in the short- to medium-term due to limited resources and a lack of adequately trained military personnel. 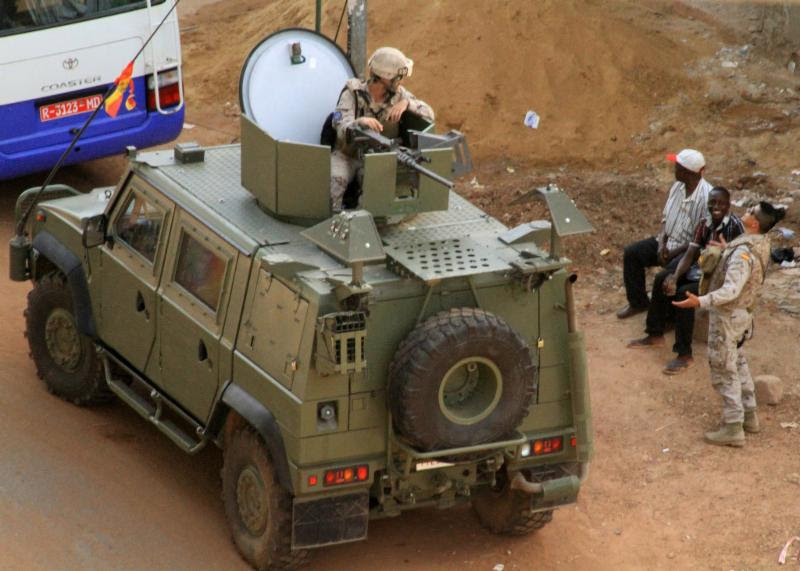 The perpetrators of the Aziz Istanbul attack are likely linked to the JNIM Islamist militant alliance, whose operations emanate from central and northern Mali across the country’s borders. JNIM is formed from the Ansar Dine, al-Mourabitoun, Khatiba Macina organisations and a sub-group of Al-Qaeda in the Islamic Maghreb (AQIM). The alliance officially announced their consolidation in March, reflecting a steady increase in the threat posed by its constituents following coordinated attacks across West Africa. The diffuse nature of the networked militant groups not only increases the complexity of countering the alliance as a whole, but enables its constituents to adapt their recruitment to local dynamics. A JNIM claim of responsibility for the attack and identification of the perpetrators with the noms de guerre of ‘Al-Fulani’ or ‘Al-Ansari’ would follow an existing pattern. However, any involvement of Burkinabe Ansaroul Islam militants would mark a notable increase in the threat of terrorism in Burkina Faso. JNIM has attacked security forces and kidnapped foreign nationals along the Burkinabe-Malian frontier, but Ansaroul Islam’s connection to the alliance’s operations has been peripheral. The local militant organisation conducts intermittent attacks on military personnel and officials along the Malian border. A formal JNIM recognition of Ansaroul Islam militant involvement in the attack would indicate the alliance’s investment in the group, and a desire to support additional operations in Burkina Faso.

JNIM and its constituent groups are highly likely to launch further attacks and kidnappings targeting foreign nationals in West Africa, but will probably conduct them in countries closer to its Malian bases. Transnational communities that share a sense of marginalisation by national governments will also likely facilitate militant activities. JNIM operations are more likely to occur in Mali, Burkina Faso, and Niger, where French military and economic interests exist, and security forces are weak. The alliance’s first public claim of an attack in Niger during July indicates an increased desire to target security forces in the country, and could provide an impetus to conduct assaults in Niamey. JNIM antecedents attacked facilities linked to the French nuclear industry in Arlit and Agadez during 2013, and militants could once again target remote resource extraction sites where foreign nationals work. JNIM holds at least five foreign nationals hostage, and has conducted cross-border kidnapping raids. Attacks are less likely in Senegal, Mauritania, Cote d’Ivoire and Guinea, but increasing political instability and tensions between the government and the armed forces in these countries could enable militant activities. The likely replacement of the French Operation Barkhane Sahel region counterinsurgency mission with the relatively weaker TF-G5 will likely allow JNIM to expand its operations and grow in strength in the long-term.

In a shifting and uncertain world, Safe Travels Magazine offers information and advice for people who want to know more before they travel.
Please note: we recommend you ALWAYS check with your nation’s travel advisory before you travel abroad.

Expert Advice: Is it safe to go to the Philippines?

Travel Advice: FCO warns visitors to Jamaica as states of emergency extended due to shootings

We use cookies to ensure that we give you the best experience on our website. If you continue to use this site we will assume that you are happy with it.OkNoRead more